The goal for this project was to come up with a game concept idea for a game of school. This game of school would be intended to give to incoming freshman to help them learn more about Capital High School. The game concept that I came up with was called Capital Punishment and you can hear more about it in the pitch below. The goal of the pitch was to use the six tools for how to present with power and poise. These tools involved different ways to use your voice to keep the audience interested in what we had to say.

Brook Chen’s evaluation: I believed that Zach did a good job of getting his point across when it came to his pitch. I really loved the concept he had for the game, “Capital Punishment”. I really think the idea of a high school simulation was a brilliant one and that it has the potential to motivate high school students to push themselves harder when it comes to their high school studies. However, I also noticed that Zach was somewhat quiet when presenting his pitch. I believe that he could have done a better job of projecting his voice more effectively by speaking in a louder voice. I also think that his presentation could be made better if he projected more confidence in his tone while presenting as well. He seemed somewhat nervous and used some filler words while he was presenting his pitch. But overall, I think that he did a good job of presenting his concept and the idea he had for the project itself was a pretty good one. The game he pitched for is a game that I would like to play. To summon up, Zach had a good concept for this project and did a good job of clearly explaining his idea in a concise and clear manner; however, I believe that he can improve his pitch further by speaking in a louder voice, using less filler words, and projecting more confidence.

I learned how important the brainstorming process is. When I first started this project I thought I knew what my idea was going  to be but after the brainstorming process I realized the idea I started out with wasn’t very good. This process not only helped me come up with more ideas but also better ideas. It also showed me that the first idea isn’t always the best idea.

What I Learned and Problems I Solved

Summary
For my Final in my IB Film class I created a VoiceThread presentation to highlight my three favorite projects that I have done throughout the year. The three projects highlight are my silent film, ADR and Making of a Champion. All of these films posed different challenges for me but I feel they helped me improve my knowledge of film and helped me become a better filmmaker.
My Voicethread Presentation
Videos:
ADR
Silent Film
Making of a Champion

Great presentations have many ingredients from the structure of the visuals to the delivery. But what makes it all work from voice, eye contact, word choice, to body language, the visuals used, etc? Let’s take a look at the act of successfully presenting or pitching an idea to reveal these ingredients.

In this project we went around the school and recorded anything that we thought we could use on my phone, we then went to the computer and got all the sounds into garage band after a few steps. After using all the sounds that we recorded from our walk we plan to then go into the sound room to record any additional foley that we need to complete the sound for the earthquake scene.

Film Before Foley and Sound Effects

Film After Foley and Sound Effects

Our teams foley process was largely based around being creative and walking through different areas of the school looking for any sound that could have any chance of making it into the video to play over the earthquake scene.

What I Learned and Problems I Solved

Sound is half the picture

1970s and Onwards: Innovation in Popular Culture – Around the World.

For this phase I took a step back and let the editor and sound designer do their work for this phase. Since the filming was done all we needed to do was put the clips in place and edit them down to fit the time limit. I wanted to let the editor do his work but also make sure that the film still achieved its original vision. For the sound designer I let him find the music for our montage but I still had to approve it to see it it fit in with the feel of the movie.

Evidence of working with the Editor 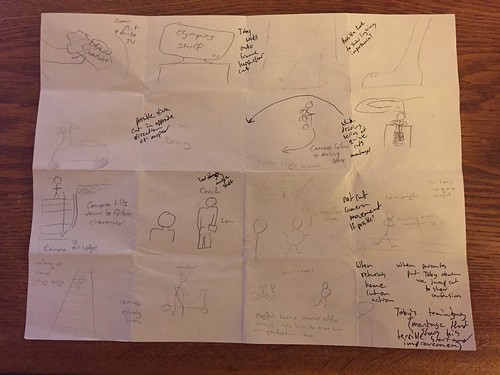 This is our storyboard with notes from the editor about some of our transitions. 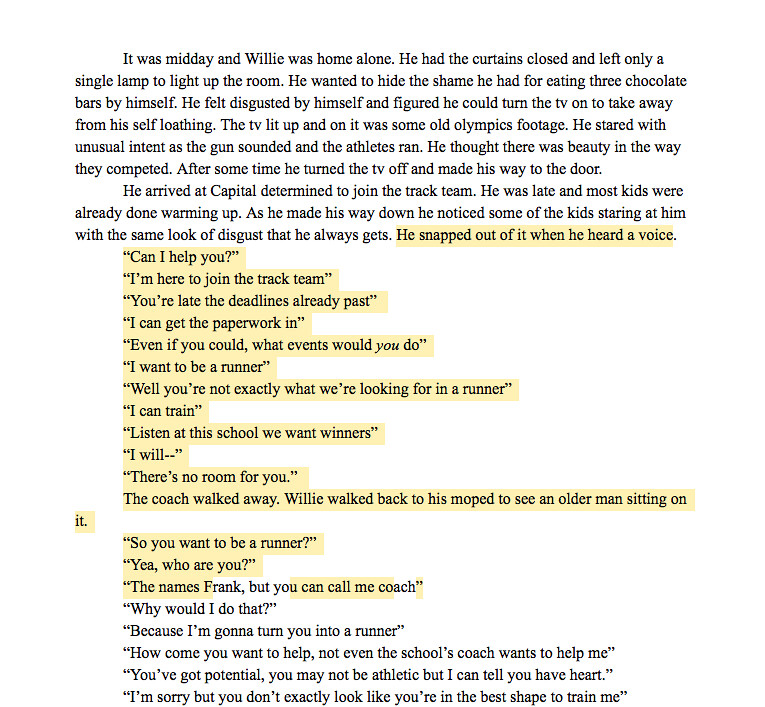 Our script started out as a short story which we then converted to a script. This was because we wanted to get the story written first and then add in the cinematic elements.

Discussions of reaction to the final cut

It didn’t include all of the scenes that I had hoped it would because we ran out of time in filming and going over the five minute mark, but I feel that it incorporated all of the artistic elements that I wanted it to have. The one discussion the editor and I had was about the quality of the video. While editing he noticed that our film so far was lower quality than he expected. This was probably a technical issue due to the fact that we did not have the best equipment to work with.

This film succeeded in achieving the original vision we had for it. On on artistic level we were able to gain access to the props, setting and costumes that we wanted. On a technical level we were able to incorporate most of the cinematic storytelling elements that I wanted to from pre-production. These elements included directing the eye, and movement on the X and Y axis. This film also met expectations in terms of its genre. The original plan for the movie was a sports comedy and I feel that it met the criteria to fall in that category.

I learned that in the post production phase the director is more of a supervisor and not as hands on. Maybe its a preference but for this project I thought it would be better to let each person have control of their position and in the end each person did their part well. This whole process taught me that a director needs to spend a good amount of time and effort in each phase because no one knows the vision for the movie better than them.